Indiana and North Carolina are among the states seeing the fastest growth.

Software companies are contributing an outsized share of growth to the U.S. economy — and not just in Silicon Valley.

The software industry represented just 3 percent of gross domestic product in 2016 but 7 percent of GDP growth from 2014 to 2016, according to U.S. government data compiled by Software.org: the BSA Foundation, part of a trade group that represents big companies like Apple, Microsoft and Salesforce.

Meanwhile, software jobs increased about 14 percent from 2014 to 2016, outpacing overall U.S. job growth of about 4 percent.

One big takeaway: Yes, the software industry is still growing in places like Silicon Valley, where the fastest-growing big tech companies — like Apple, Google and Facebook — have traditionally located their headquarters and dollars. The top states for absolute job growth are California, Texas and New York, as well as Virginia, Massachusetts, Illinois and Florida — all states with big population centers and established tech industries.

But other states are also rapidly growing their nascent software industries. The two U.S. states with the largest percentage increases in software employment from 2014 to 2016 were Kansas, up 38 percent, or 6,100 jobs; and Indiana, which grew by 32 percent, or about 8,800 jobs.

Idaho and North Carolina had the largest increases in software’s contribution to GDP in that time. Idaho’s software GDP increased 42 percent, or $280 million; while North Carolina’s grew 41 percent, or $3.8 billion, in two years. 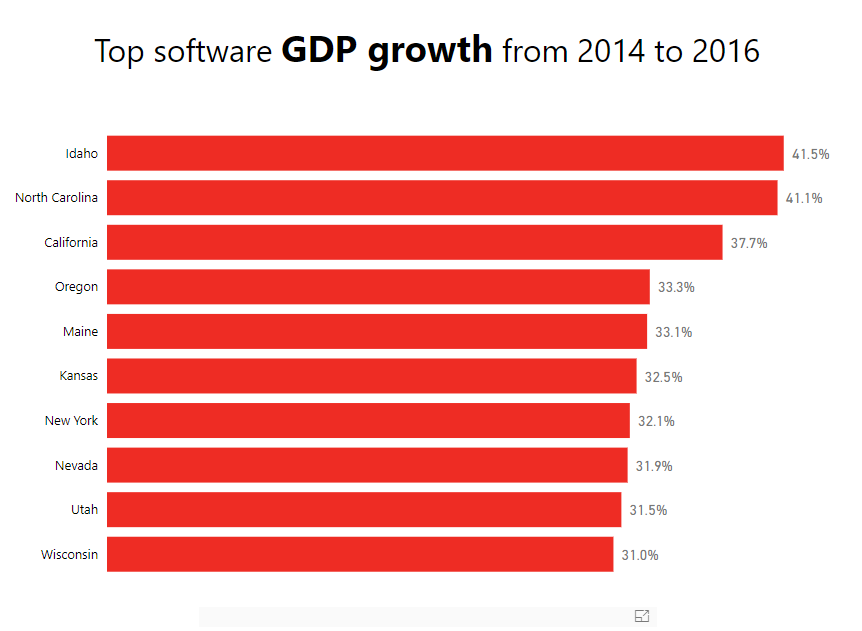 What’s happening? All industries, not just those centered on technology, are looking for software talent. Greater competition over a limited pool of technology employees is pushing companies to go where the employees are, according to Colin Yasukochi, director of research and analysis at real estate firm CBRE.

In its tech-talent report earlier this year, CBRE found that 63 percent of jobs in IT — a term they defined more broadly than just software — were in industries outside of tech. From precision farming in agriculture to driverless technology in automobiles, old industries require new software talent.

Secondarily, Yasukochi said, major tech hubs like the Bay Area can be prohibitively expensive as far as cost of living. Companies looking to get more bang for their buck, and employees looking to make their salaries go further, are sometimes choosing software jobs in lower-cost cities.

In May, Salesforce, which has its second-largest presence after San Francisco in Indianapolis, opened a new office tower — the tallest in Indianapolis. The company also promised to add 800 new jobs in Indianapolis within five years.

This summer, Indian software company Infosys and Swiss financial institution Credit Suisse upped their presence in the Raleigh-Durham, N.C., area, known as the Research Triangle for its proximity to universities.

Software Industry GDP & Employment for the State of Indiana:

Take a closer look at GDP and employment growth by state, Click Here.

For this report, Software.org commissioned the Economist Intelligence Unit to analyze their own data, along with data from Implan, the National Science Foundation, the U.S. Bureau of Economic Analysis, the U.S. Bureau of Labor Statistics and the U.S. Census Bureau. They determined software jobs to include software publishers, computer systems design and related services, data processing, hosting and related services and internet publishing and broadcasting and web services.