As the developed world grows younger and older and its economic focus shifts toward knowledge industries, demand is rising for a new generation of walkable urban places to better position communities response to markets and to compete for knowledge industry workers, jobs, and investment. As market values for denser, mixed-use, walkable, urban environments rise — relative to strip retail centers and outmoded office parks — suburbs and small town downtowns are emerging as the next urban frontier.

While this next generation of urban places relies primarily on private investment, ironically it places new emphasis on civic leadership and public/private partnerships. In era of growing income disparities new urban places require a conscious focus on equity to avoid creating a generation of “gated downtowns”. To achieve their promise as the civic, economic, and social heart of community life, these urban places are shaped by principles inspired by traditional Main Streets, but adapted to the very different scale and development realities of the 21st century:

• Above all, they’re walkable—distinguished by lively sidewalks, animated by a wide variety of amenities that invite people to walk.

• They connect to their community at many levels—by bike, on foot, by transit—and by the dominant mode of the next two decades—autonomous mobility.

• They enjoy a multilayered public realm—from “active” squares to places of quiet reflection together with civic spaces.

• They offer a diverse mix of choices—for living, working, shopping, and playing, geared to diverse lifestyles.

• They are authentic—defined by the living culture and ecology that distinguish a community. 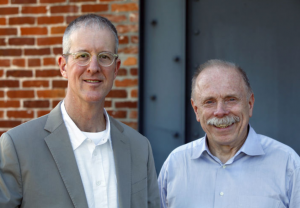 David Dixon (right) photo with Jeff Speck (left) – Elkhart’s River District Urban Planner – who will also be in attendance for this special event.

Source: David Dixon: The Urban Opportunity and How to Unlock It, October 12, 2017 Event Page