San Francisco Bay Area – Boasts a large ecosystem of big-name tech companies, start-ups and universities and attracts the lion’s share – approximately 70% – of technology-focused venture capital, a large draw for creative and entrepreneurial-minded software engineers. However, the Bay Area suffers from a very high cost of living and a hyper-competitive hiring environment that are forcing tech firms to expand outside the region.

New York City – Though some serious software development is done in NYC, it’s not on the same scale as San Francisco. The NYC market is less start-up oriented than San Francisco – approximately 10% of technology-focused venture capital flows there – and is dominated by media-social and digital media-related tech industry, attracting application and non-engineer developers. NYC is also a center for technology consulting firms. 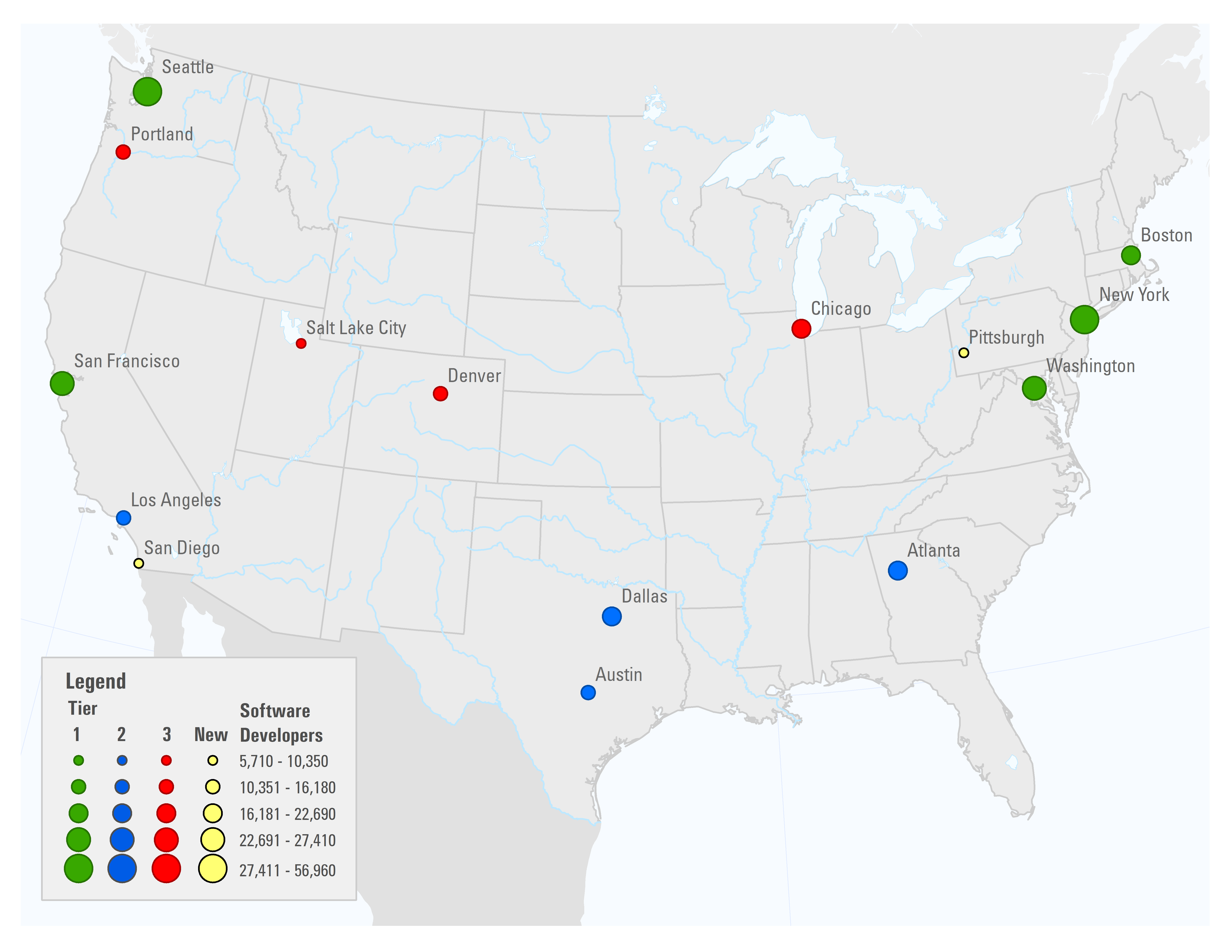 Seattle – Though smaller and attracting venture capital investment on par with NYC, this market has many similarities with the Bay area, thanks largely to two key, diversified technology giants, Microsoft and Amazon Seattle could easily be the cloud computing capital of the world, a technology that is certain to grow in the future.

Washington, DC-VA-MD – Washington DC’s suburbs in Northern Virginia and Maryland are home to most prominent tech companies and those that specialize in government and defense contracting. The Pentagon, CIA, NSA, and FBI also employ a legion of technologists. This region has a large concentration of very specialized skills and therefore attracts tech professionals who are motivated to do such work.

Boston – In spite of the presence of top STEM schools and universities including the prestigious MIT, Boston has struggled to become a preferred location for tech companies. However, it is probably the most innovative tech hub after the San Francisco / Silicon Valley, owing largely to top notch research in its universities and tech startups that spin out of these labs. It not only benefits its large biotech and pharmaceutical clusters but also promotes cross-fertilization of ideas with the tech sector.

Austin – Like San Francisco, Austin has a significant tech start-up culture, attractive to software engineers. Many Silicon Valley companies have a presence in Austin. However, scaling in Austin has become challenging because of rapidly increasing competition.

Dallas – Due to the market’s sheer size more software engineers call Dallas home than Austin; however, you’ll find much of the city’s tech workforce in corporate IT positions. Dallas is home to many large corporations, especially oil & gas and finance, and its start-up culture is not as dynamic as that in Austin.

Atlanta – This jewel of the south is now a cosmopolitan city with the busiest airport. Atlanta shares many characteristics with Dallas as it has many Fortune 500 headquarters that also employ corporate technology workers. Some of the top tech consulting firms also have significant presence in Atlanta. Connectivity, affordable living, big city amenities, and a diversity of job opportunities attract youth to Atlanta. Georgia Tech has one of the top engineering schools feeding this growth.

Los Angeles – Obviously a huge market with considerable room for growth, L.A. is comparatively less developed as a tech hub, with the majority of the workforce employed in the entertainment, internet of things, and social media. The universities, young demographic, innovation culture, and lifestyle alternatives make Los Angeles a potential growth market for technology companies.

Chicago – It is surprising that a city of this size with all the ingredients to be a top tech hub – along with the cultural assets that millennials prize – has yet to develop into one. The quantity and quality of universities graduating tech professionals in and around the area (including University of Illinois, Michigan, Indiana, Purdue, Notre Dame and Wisconsin) is impressive and presents a ready-to-tap growth opportunity for competition ravaged Bay Area companies.

Salt Lake City – The city’s biggest challenge to attracting tech talent has been a cultural one, with the perceived dominance of religion that might limit social life.. If true in the past, this is changing fast. The lifestyle the city affords, as well as Utah’s pro-business environment, is increasingly attractive to small and start-up tech firms and with Salt Lake City’s growing success in drawing tech talent other companies are beginning to follow.

Portland, Oregon – Portland has quietly grown into a hub of tech innovation in the areas of Internet of Things and wearable technology. The presence of sports apparel companies, like Nike, Adidas, and Columbia, and of the semiconductor giant, Intel, has encouraged many software professionals to move to Portland. Also, many smaller tech firms and startups that can’t afford to be in the Bay Area have chosen to move to Portland. Bigger names like Apple, Google, and Twitter have followed.

Denver-Boulder – This city on the edge of Rocky Mountains attracts young professionals because of the outdoor lifestyle it offers. Comcast, Oracle, and Lockheed Martin have a large presence here but there is an emerging startup ecosystem that may compete more successfully with other cities in central United States.

Pittsburgh – Though very small in comparison to the other cities on this list, Pittsburgh boasts a top university, Carnegie Mellon, which happens to be one of top 3 universities supplying San Francisco’s tech talent demand. The city is shedding its image as a blue-collar town, with large players, like Google, Uber and Apple, locating development centers in Pittsburgh. Millenials are also recognizing the advantages of the city’s modest cost of living when compared to the top-tier cities.

San Diego – With presence of defense technology, biotech, and pharmaceuticals, San Diego is an innovation hub. This creative culture is now attracting software professionals as technology intersects with these major sectors in San Diego. Also, the ability to set up lower-cost “off-shore” software centers in Tijuana, Mexico, which is like a twin city of San Diego, makes it possible to tap into the large talent pool south of the border.

The bottom line is, tech talent’s choice of destination city comes down to the individual, and individual priorities change over time. Those who want to build and create tend to go to a top-tier city, at least for a few years. They’re willing work more hours and live in smaller apartments, but at a different stage of life – perhaps when they want to start a family – they’re more likely to move on to a second or third-tier city. Today’s tech workforce knows lucrative jobs can be found in virtually any city, and they’ll research cities that offer what’s most important to them, whether it’s an entrepreneurial business culture, lower cost of living, or a better work-life balance.